A little note on my Vol State Race for Marathon High 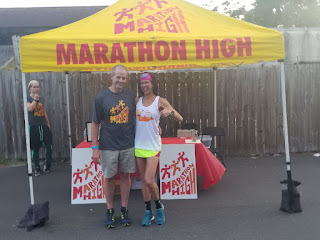 Regina's Story:I have not always been athletic, and I have not always been a runner. I have also not always been the happy go lucky, confident, comfortable with who I am person you know today. Life can be hard, with many bumps in the road. At the age of 30 I discovered running, and I never looked back. I still had ups and downs in my life, but being a runner helped me look at these obstacles differently, and feel diferently about myself. Running and being active became a great tool for me to deal with stress, and express who I am.

Once my business started to grow, I started to look for ways to give back, but I wanted to do more than write a check. I heard about Marathon High, so I asked about being a sponsor. I came to an All School Run, and I was so impressd with the teens running together, the encouraging atmosphere, the coaches working with them to cover a long distance. This is what I want to do.

Now I have been a coach at Douglas Anderson High School for 3 years, and I continue to sponsor and promote this amazing organization. Marathon High is the single most rewarding and important thing I've done outside of work in a long time.

Teenagers are amazing, smart, interesting, kind, thoughtful and many more wonderful adjectives that come to mind. But they have pressures coming at them from so many directions, with few good outlets to deal with this pressure.

Marathon High gives teens the gift of running, working towards a big goal together, reaching smaller goals along the way through commitment, perseverance, overcoming obstacles. We run together 3 times per week for 4 months, welcome all ability levels, and run a half marathon together at the end of each season.

I see so much growth in our students during the season and from year to year. I know we are making a positive difference for them. I also see a lot of magic happen for our coaches and parents.

Marathon High has inspired me immeasurably to work hard to help others, to be the best person I can be for my loved ones, to be a role model for our youth, and to run an honest business where I always try to do the right thing.

In July I will be running 314 miles across Tennessee as part of the Vol State Road Race. I will be running these miles in support of teens and Marathon High. Two of my students designed this awesome logo for me.

I am very grateful to be able to run far and spread the gift of a healthy active lifestyle, and a better feeling of self to as many teens in our area as possible. I hope you will help me spread the word and support teenagers.

Teenagers are really pretty awesome, and I feel if we lift them up that our future and theirs will be bright. Running does not solve all the problems in the world, but it sure does change a lot of things for the better.

Gorgeous Mandarin home on over half acre preserve lot with deck & paver patio with fire pit. This home is an entertainer’s dream. Beauti...